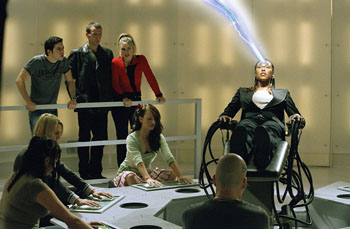 "Bring me a Doctor, I got a hole in my head!"
"Create a climate of fear, and it's easy to keep the borders closed. It's just a matter of emphasis. The right word in the right broadcast repeated often enough can destabilise an economy, invent an enemy, change a vote."
— The Editor
Advertisement:

The one where a head gets pregnant.

Rose, Adam, and the Doctor land on a space station in the year 200,000. The Doctor expects to encounter the centre-of-the-British-Empire satire such as was seen in old Who episodes like "Kinda", and proudly tells them to prepare for "Humanity at its height!", with splendid cuisine and high culture. But what they get is a satire of early 21st century culture: a dingy station where people eat things like Kronk-burgers and beef-flavoured shakes, and "high culture" turns out to be the future equivalent of "zillions of channels and nothing on". All anyone aspires to is a trip to the fabled 500th Floor, which is rumoured to have walls made of gold. Also, there's a Bad Wolf channel.

Rose and Adam are still too new to the whole travelling thing to be disappointed, but the Doctor is thoroughly mystified. He befriends Suki and Cathica, a pair of journalists, and convinces them he's from Management. This leads to them showing him how journalism is done in the future: it consists of Cathica opening a hole in her head and having data beamed through it. Now the Doctor is also grossed out.

The intruders have started to attract the attention of the mysterious Editor (Simon Pegg). He lives in the icy dump of the 500th floor, overseeing the flow of information. The Editor is even more intrigued when the computers of the future reports that the Doctor is "no one" and Rose is also "no one". Meanwhile, Adam has snuck off to have his very own hole put into his head by the local head doctor (hey, it's Tamsin Greig!).

The Doctor and Rose discover that the Editor is an employee of the Mighty Jagrafess of the Holy Hadrojassic Maxarodenfoe (Max for short), an ugly, toothy, slimy monster living on the ceiling of the 500th Floor. Max has taken control of all information on Earth and is responsible for preventing the "humanity at its height" timeline from happening. He's also using the space station as a fridge to keep himself cool. Adam, meanwhile, uses his new head port and Rose's superphone to send information of the future to his mum's answering machine — unfortunately, this gives the Editor access to everything he knows about the Doctor and Rose, including where to find a key to the TARDIS. Whoops.

Fortunately, Cathica hacks into the computer, shuts down Adam's feed and tampers with the heating to deep-fry Max, who promptly proves he's Made of Explodium and goes boom. Happy ending for everyone in this satellite, except of course for the evil guys. And the good guys who died earlier. And Adam, since the Doctor decides he's too stupid to be a companion. So the Doctor boots him out of the TARDIS, fries his home phone to remove the evidence of his tampering with history, and he's left home with a hole in his head. Just in time for his mother to inadvertently make it pop open ...

Continued in the Prisoners of Time comic.