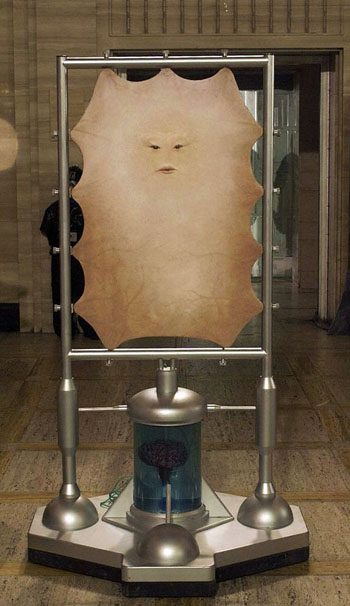 "Moisturise me!"
"You lot, you spend all your time thinking about dying, like you're gonna get killed by eggs, or beef, or global warming, or asteroids. But you never take time to imagine the impossible. That perhaps you make it. Maybe you survive. This is the year 5.5/apple/26, five billion years in your future, and this is the day - hold on... [the Sun starts to become a red giant] This is the day the Sun expands. Welcome to the end of the world."
— The Doctor
Advertisement:

The one with the bitchy trampoline and an elegy courtesy of Britney Spears.

Rose expresses a wish to visit the future, and the Doctor cheerfully obliges... but scorns her idea of a mere hundred years in the future in favour of five billion years. Nothing succeeds like excess!

It's the year 5.5/Apple/26 when the Doctor and Rose materialise aboard Platform One, a cruciform space station orbiting a dying star, specifically, the Earth, which is about to be enveloped by the expanding sun.

Earth has long been empty of any kind of life. The humans left it long ago and the planet was taken over by the National Trust. They have used gravity satellites to hold back the effects of the Sun, but the money has run out. Earth will be swallowed up by the Sun at last. The rich and powerful of the universe will gather here to witness the end of the world, which will occur in about half an hour. The station has automated systems and is staffed by blue-skinned humanoids.

On encountering the Steward, who manages Platform One, the Doctor persuades him that he and Rose are invited guests by using his psychic paper. As the Doctor and Rose wait, the other guests arrive and are announced, including the diminutive Moxx of Balhoon, the Face of Boe, living humanoid trees from the Forest of Cheem (whose ancestors originated on Earth), the brothers Hop Pyleen (inventors of hypo-slip travel systems), Cal Spark Plug, Mr. and Mrs. Pakoo, the Ambassadors from the City State of Binding Light, and, from Financial Family Seven, the hooded Adherents of the Repeated Meme. Rose watches in horrified fascination as the guest of honour arrives: Earth's last human, the Lady Cassandra O'Brien.Δ17, a piece of stretched-out skin with eyes and a mouth mounted on a frame and connected to a brain jar. The skin needs to be constantly moisturized by her attendants. The guests exchange gifts. Jabe of the Forest of Cheem gives the Doctor a cutting taken from her grandfather. The Doctor gives her the gift of air from his lungs. The Moxx gives the gift of bodily salivas, and the Adherents of the Repeated Meme hand out gifts of "peace" in the form of metal spheres, even to the Steward.

Cassandra gives her own gifts: the last ostrich egg, and an "iPod" (a jukebox) from ancient Earth. Rose is a bit overwhelmed when the jukebox plays "classical" music — "Tainted Love" by Soft Cell — and leaves the hall. The Doctor receives a call about the TARDIS' parking place and is given a ticket telling him where it is being moved. Elsewhere, Rose has a brief conversation with a station plumber, Raffalo, who is investigating a blockage. At first she is comforted by the familiarity of Raffalo's matter-of-fact, working-class manner, but when Raffalo explains that she is from Crespallion, which is part of the Jaggit Brocade, affiliated to the Scarlet Junction in Complex 56, Rose realises just how far she is from home, with a man she does not know. She leaves and does not see Raffalo spot small, spider-like robots in the ducts, which rapidly grab her and pull her inside. The spiders are being disgorged from the metal spheres gifted by the Adherents of the Repeated Meme to guests. They soon infiltrate the entire station, sabotaging its systems.

The Doctor finds Rose. When she asks where he is from, he brushes off her questions. When the Doctor alters Rose's mobile phone so she can talk to her mother in the past, another fact sinks in — her mother is long dead. The Doctor jokes that if Rose thought the telephone call was amazing, she should see the bill. Suddenly, a tremor shakes the station, and the Doctor gleefully observes that that wasn't supposed to happen. The Steward, investigating the cause of the tremor, is killed when a spider lowers the sun filter in his room, exposing him to the direct heat of the Sun's rays.

The Doctor starts to look into the tremor and Jabe offers to show him where the maintenance corridors are, while Rose goes to speak to Cassandra. Rose finds Cassandra has had 708 cosmetic operations and considers herself the last "pure" human — the others who left "intermingled" with other species and she considers them all mongrels. Her 709th operation, to bleach her blood, is next week. Disgusted that humanity has come to this, Rose insults Cassandra and storms off, only to be met by the Adherents, and the leader hits her in the head, knocking her unconscious.

In the corridors, Jabe quietly tells the Doctor that she scanned him earlier, and was astonished to discover he exists. She sympathises with him and the Doctor is briefly moved to tears. They continue to the bowels of the station, where they find one of the spiders. Jabe captures it with a long, vine-like appendage.

As the station's systems continue to fail and, as a "traditional ballad" (Britney Spears singing "Toxic") plays on the jukebox, Rose wakes up and is trapped in a room with a lowering sun filter. The Doctor hears her cries for help and raises the filter, but Rose is still locked in. Returning to the main hall, he releases the spider to seek out its master. It first scurries over to Cassandra, and then veers towards the Adherents of the Repeated Meme. The Doctor finds this to be a clever attempt at misdirection, since a meme is just an idea, and rips off one of the Adherents' arms, revealing they are robots, which all collapse to the floor. He then sends the spider out to find who was controlling them and it goes directly to Cassandra.

Cassandra has her attendants hold the others at bay, saying the moisturiser guns can also shoot acid. Her operations cost a fortune and she was hoping to create a hostage situation while pretending to be one of the victims herself and later seek compensation. Now she will just let everyone burn while the shares in the guests' rival companies Cassandra holds will triple in price. Cassandra orders the spiders to shut off the force field protecting the station, then uses a teleportation device to transport herself and her attendants away.

With only minutes until the Sun incinerates Earth and the station, the Doctor and Jabe rush back to the air-conditioning chamber. The restore switch for the computer systems is at the other end of a platform blocked by giant rotating fans. The Doctor protests the rising heat will burn the wooden Jabe, but she insists on staying to hold down the switch that slows the fans. The Doctor makes it nearly to the end before Jabe catches fire and burns. He closes his eyes and concentrates, making it past the last fan and throwing the reset switch. The force fields come up around the station just as the Earth explodes into cinders. The station's systems start to self-repair.

Several of the guests are now dead, incinerated as the Sun's rays burst through cracks in the windows. The Doctor finds Cassandra's teleportation feed inside the ostrich egg and reverses it to bring her back. She starts taunting the Doctor, saying that he cannot do anything about her. However, the Doctor calmly notes he has transported Cassandra back without her moisturising attendants. In the heat, she begins to dry out. Cassandra begs for mercy and Rose asks the Doctor to help her, but the Doctor coldly says that everything has its time and everything dies. Cassandra's skin stretches and tears, her innards exploding, leaving only her brain tank and empty frame.

Rose is sad that in all the danger, Earth's passing was not actually seen by anyone. The Doctor takes her back to the present in the TARDIS, telling her that people think things will last forever, but they don't.

The Doctor: You think it'll last forever, people and cars and concrete, but it won't. One day it's all gone. Even the sky. My planet's gone. It's dead. It burned like the Earth. It's just rocks and dust. Before its time.
Rose: What happened?
The Doctor: There was a war, and we lost.

Faced with the utter strangeness of the universe and the tragic briefness of life, Rose decides... that they had better go get some chips. After all, they've only got five billion years until the shops close.

(Unfortunately, it'll take another four years before we find out exactly what happened to the Doctor's planet, and another eight to find out the circumstances that led to what happened.)

Alternative Title(s): Doctor Who NSS 1 E 2 The End Of The World