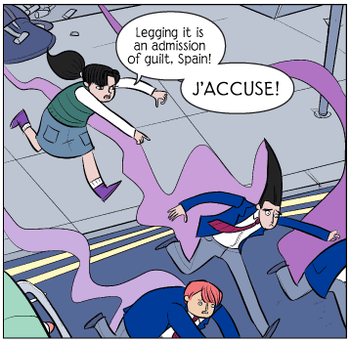 "Or, as they would say it in Spain, yo acuso!"
Advertisement:

Simply, when one is outraged beyond all other words, when there is nothing left to do but put on your Frenchiest of accents, point your pointiest finger, and cry, J'accuse!.

It means "I accuse [you]" in the French.

This is half a storied work of public journalism, half Memetic Mutation. It goes like this:

Once upon a time in France, a renowned writer named Émile Zola penned a scathing open letter to the President (published in liberal publisher Georges Clemenceau's newspaper L'Aurore on January 13, 1898) that accused the government of France's Third Republic of anti-Semitism and corruption in its handling of the Dreyfus Affair of 1894 — in which an innocent French Army officer, Alfred Dreyfus, who just happened to be Jewish, was used as a scapegoat in a German espionage case (France had recently lost a war to Germany and despised them), when it was quite clear to everyone that the only thing that Dreyfus was guilty of was being Jewish and from the region of Alsace (which the Germans had taken from France as part of the peace settlement). The letter pointed out the weakness of the evidence and several clear occurrences of judicial error and prejudice during Dreyfus's trial, and formally named and accused scores of people of everything from incompetence to crimes against justice and humanity; for someone so prominent and respected as Zola to write something so harsh was a big deal, and for that Clemenceau (who loved picking political fights) set the sensationalist headline, in giant, bold letters: "J'Accuse...!".

Naturally, the conservative French establishment was scandalized, and in retaliation Zola was rapidly charged with and convicted for libel (which he had predicted he would be in the article, even citing the specific laws he would be charged with breaking) and had to flee to England for a year, until the bureaucrats then in power were removed. Dreyfus had been sentenced to life in prison on Devil's Island; he appealed his case multiple times, but it was not until 1906, twelve years after his trial, that his conviction was actually annulled.

Even though Zola's letter itself is famous, the Stock Phrase it has inspired is even more popular as a way to spice up an accusation with a little French.

Films about the Trope Namer: