Getting Hot in Here 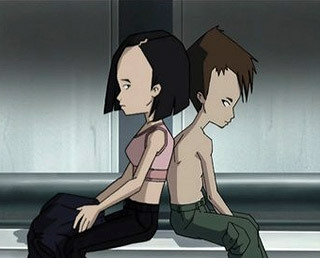 Characters are Locked in a Room, and the temperature's rising to Sauna of Death levels. They decide to take a few clothes off to get comfortable (but not necessarily "get comfortable").

Often, but not quite always, done for the purpose of Fanservice.

A frequent variation is to have the characters being discovered in a state of entirely innocent dishabille by rescuers who immediately assume they've been taking advantage of time while waiting for the rescue.

Another variation involves deserts, which would actually be a bad idea in real life, on account of loss of bodily fluids, sunstroke, etc. — the stereotypical Arabic costume of robes and head-dress exists for a reason. See also Heat Wave.

(The middle lines are often cut in re-runs, resulting in a rather odd non-sequitur.)