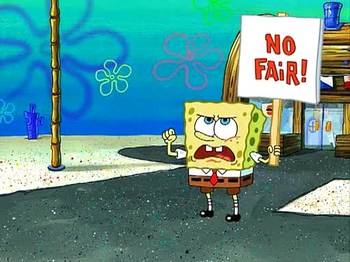 "Krusty Krab is unfair! Mr. Krabs is in there! Standing at the concession! Plotting his oppression!"
Quagmire: What do we want?
Other Pilots: FAIR WAGES!
Quagmire: When do we want it?
Other Pilots: ORIGINALLY NOW, BUT IT'S BEEN DELAYED UNTIL 9:40 DUE TO WEATHER IN PHILLY!
— Family Guy, "American Gigg-olo"
Advertisement:

This is an episode where a character or group of characters, feeling overworked, underpaid or underappreciated, decides to take action against his bosses and go on strike. Common elements of a strike, such as picket lines, tense negotiations and scabs may ensue.

The Strike may be a result of a Weird Trade Union if examples come from people who usually wouldn't strike.

It should be noted this has nothing to do with bowling or baseball, or episodes about TV Strikes, although they may overlap if they occur around the same time.