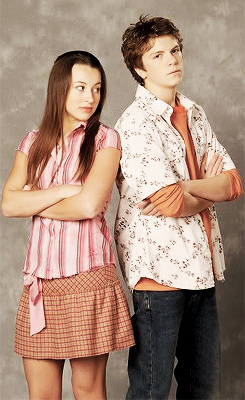 In which the extreme Tsundere and the extreme Jerkass must become brother and sister. It doesn't work too well.
Advertisement:

The show focused upon two families merging together after divorces. In typical Nuclear Family fashion, the siblings don't get along all the time and Hilarity Ensues. The main character is Casey, a perfectionistic, overly controlling, teenage girl who has a rivalry with the titular Derek, her main antagonist, a sarcastic, prankster jerk. The show ran for two short thirteen-episode seasons (2005-06 and 2006-07) and two full seasons (2007-08 and 2008-09).

In late 2012 there was scheduled to be an official relaunch with the working title "Life With Derek, Again" involving the original cast members in pre-production. It was not picked up for production.

Tropes used by Life With Derek