This is the character sheet for Life with Derek.

Casey is the protagonist and is the polar opposite of Derek in just about every way. This often leads to conflict between the two. Prior to her mom remarrying, Casey only had one younger sister and, much like Derek, was used to being in charge. She is studious and high maintenance, but throughout the course of the show becomes a little more easy going. Casey often confides in her guidance counselor, Paul, about her problems - or just to vent about Derek. 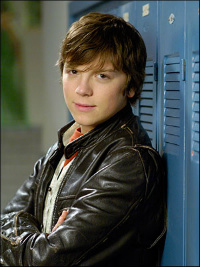 Played by Michael Seater
"If you have a complaint, you can put it in my suggestion box."

Derek is Casey's step-brother and her primary antagonist on the show. He's popular and good looking and not very book smart, although it is hinted at a couple of times that he's just lazy and that if he put more effort into school work, he'd probably do a lot better. He is used to being the one in charge at home, but the arrival of Casey and her family disrupts that, and he's not particularly fond of changing his life style around. He's sneaky and manipulative and not above lying to Casey to get what he wants. That said, even though he and Casey are often at each other's throats for one reason or another, he does have a soft side, but it's usually reserved for his younger sister Marti.

Edwin is Derek's younger brother, and the middle child along with Lizzie. He tends to feel like he's the Un Favorite and although he looks up to Derek, he has been shown to have a bit of an inferiority complex.

Played by Jordan Todosey
"But that still gives you 2 out of 20. And any score less than 6, I'm supposed to call a social worker."

Lizzie is Casey's younger sister and, like Edwin, is the middle child. She is probably the most level headed of her siblings, but even she has her moments. She and Edwin often partner up when scheming for or against their older siblings. Being the middle child doesn't seem to bother her as much as it does Edwin.

Played by Ariel Waller
"I have an announcement! I'm not wearing socks!"

Marti is the youngest child in the Venturi-McDonald household until The Movie. She seems to get along with all of her siblings, but is closest to Derek and is one of the few people to whom Derek will open up. She can be annoying at times, but gradually grows out of that as the series progresses.

Nora is Casey and Lizzie's mom. She is married to George Venturi, who is her second husband, and throughout the series is often the Only Sane Man. She finds out that she's pregnant in the final season, and it is revealed in The Movie that she and her mother don't exactly get along.

George is the father of Derek, Edwin, and Marti. He is a lawyer, a bad driver, and it is implied that when he was younger, he was very much like Derek. 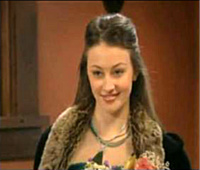 Vicky is Casey's cousin. She's first introduced in season 1 and is one of the few characters, apart from Derek, who get under Casey's skin. When it is revealed that the reason she is so mean to Casey is because she's jealous of her, she and Casey reconcile. She later returns in season 4, played by a different actress, and gets caught kissing Casey's boyfriend at a party. 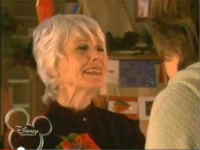 Aunt Madge is George's aunt. She is a notorious cheek pincher who, it's implied, doesn't see George and his family often. She only appears in one episode. 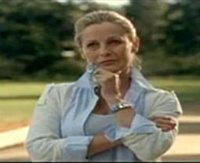 Felicia is Nora's mom. She is introduced in The Movie, at which point she hasn't seen Nora or Lizzie and Casey in four years. She openly disapproves of Nora getting remarried and raising five kids, and is not happy when she finds out that Nora is pregnant. At first, she wants nothing to do with the Venturi kids, and is reluctant to agree to let them stay at her lodge. After a fight with Casey, she has a change of heart.

Emily is Casey's best friend. She lives next door to the Venturis and has had a crush on Derek for a long time, even going so far as to keep tabs on him. She eventually gets over her crush on him and gets together with Sheldon Schlepper until he moves away. She finally gets her chance with Derek at the end of the fourth and final season.

Ralph is one of Derek's friends and bandmates.

Sam is Derek's best friend. He is also Casey's first love interest on the show. He's a generally nice guy and he and Casey manage to stay on friendly terms even after they break up.

Truman is much like Derek, minus any redeeming qualities. He makes his debut in season 4 and shows an interest in Casey. After much resisting, she agrees to go out with him. He then makes out with her cousin Vicky at a party, and they break up. But she takes him back at prom because he's secretly a wounded soul afraid of commitment.

Max is a popular football jock at school in whom Casey takes an interest. He's a fairly decent guy, although he and Casey don't have a lot in common. They eventually break up when Casey feels like she's changed for the worse.

Kendra is one of the popular girls at school and, like most girls, shows an interest in Derek.

Sally is Derek's co-worker and is, arguably, the first girl he's really tried to work hard at at winning over. She's a bit older than him and convinces him to take her to prom, since she missed her own. They eventually break up when she leaves for college.

Noel is introduced in season 3 as Casey's leading man in a school play. It's revealed that he likes her, but since she's with Max at the time, he keeps his feelings to himself.

Sheldon is first introduced when he's running for class president against Casey. The writers liked him so much that they brought him back as a reoccurring character. He gets together with Emily, much to Casey's surprise. When he's forced to move, he proposes to Emily at prom, but she turns him down since they're still in high school.

Paul is Casey's guidance counselor to whom she vents in just about every episode.