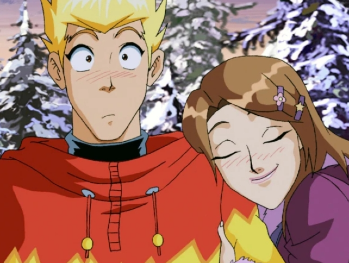 Martin's feeling the brotherly warmth… in his pants.
Greg Brady: No, we wouldn't go to hell, because she's not really our sister.
Peter Brady: So these feelings are natural?
— Robot Chicken, "Mr. and Mrs. Brady"
Advertisement:

So you've got two unrelated teenagers whose parents have recently gotten hitched. Said teenagers happen to have compatible sexual/romantic orientations. Whether they find it squicky or not, hormones are going to fly. Usually this is seen in the undertones of their behavior in a show, and it almost always happens when two people become step-siblings in adolescence. Sometimes though, this is unintentional on the part of the writers and attempts to make new step-siblings act like long-time siblings just come off as flirty.

The Romance Novel is also fond of this trope, generally involving older stepsiblings. It has the double effect of giving them reason to resent each other over their lives' disruption and giving them no way to escape the other entirely (without cutting off from their parent as well).

See Little Sister Heroine for when the relationship is made more explicit and emphasized. This may be played as part of Blended Family Drama.

People who become step-siblings at a very young age and grow up together are more likely to consider each other truly siblings and thus off limits for dating. This may also cross the line in the supposed Westermarck Effect. This trope can be Truth in Television for many stepsiblings whose parents married during or after their puberty, though they rarely end up becoming an official couple due to social factors.

Because All Abusers Are Male and Double Standard Rape: Female on Male, it's assumed that Toby was the perpetrator. He wasn't. Adaptational Consent was in play.
Jenna: You need to be home. Where you're safe.
Toby: You could chain me to this porch and I'd still never touch you like that again.