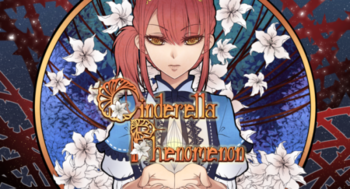 Lucette, the crown princess of Angielle, is not your typical fairytale heroine. Cold-hearted and bitter, she deeply resents her new stepmother and siblings after her beloved mother's death during the kingdom's Great War between fairies and witches and the only beings she displays any affection toward are her dolls which has led to her being hated or feared by everyone else in the kingdom.

However, that all changes one day when one of Lucette's dolls reveals herself to be a witch and inflicts her with the Fairytale Curse, an enchantment created by wicked witches to punish humans with curses based on well-known fairytales. In Lucette's case, the curse is a twisted version of "Cinderella" that causes her to go from Riches to Rags and almost everyone else to forget that she was ever the princess of Angielle.

Lucette must break the curse by performing three good deeds, a task that's easier said than done for someone like her. Along the way, she comes into contact with a variety of characters afflicted by the Fairytale Curse too — her stepbrother Rod who's rendered mute by the Mermaid Curse, a puppeteer named Waltz who's trapped in a child's body by the Neverland Curse, an amnesiac man who calls himself Rumpel after his Rumpelstiltskin Curse, a flamboyant crossdressing man named Karma who refuses to divulge the full details of his curse, and her knight Fritz who's always been kind to her but may have a hidden dark side — who she can work together with to undo each other's curses and even fall in love with.

However, it turns out that there is far more at stake than a princess needing to learn compassion, and Lucette getting her fairytale ending with her man of choice will require a lot more work than three good deeds.

This visual novel can be downloaded for free on itch.io

The main game is followed by a fandisc, Cinderella Phenomenon: Evermore. It features extended epilogues for each of the love interests, focusing more specifically on their relationship than an overarching plot. It was released in January 2021, with a cost of $10.