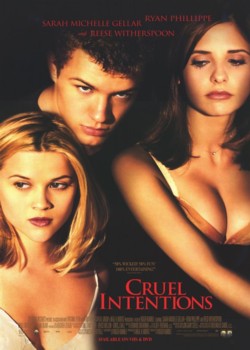 In the game of seduction, there is only one rule: Never fall in love.
"It amazes me someone as charming as you can be so manipulative."
—Annette
Advertisement:

Cruel Intentions is a 1999 American drama film written and directed by Roger Kumble, and starring Ryan Phillippe, Sarah Michelle Gellar and Reese Witherspoon. The movie is a comedic and dramatic appropriation of the 18th-century French epistolary novel Les Liaisons Dangereuses by Laclos, but unlike other modern film versions of the novel (Dangerous Liaisons) is not set in the France of that time.

The story follows a handful of wealthy teenagers living in modern New York City. The plot is mainly driven by a bet held between the two main characters, and it heavily involves manipulation, seduction, and love in a rich and sophisticated socially elite youth atmosphere.

The film started as an independent film with a much smaller budget, and was later picked up by Columbia Pictures. The film was released on March 5, 1999. It was later followed by two direct-to-video films: a prequel, Cruel Intentions 2, and a sequel, Cruel Intentions 3. A pilot for a sequel television series set 15 years later was in the works for NBC, with Gellar returning to the role of Kathryn, but the network ultimately passed on the series.

In 2018, the film was adapted into a Jukebox Musical of 90s hits, which premiered Off-Broadway. The cast album is available for streaming on Spotify and YouTube.

Example of:
Some of My Best Friends Are X