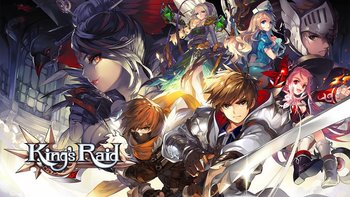 Over 90 heroes and still counting!
Advertisement:

King's Raid sees the player assemble a team of up to four unique characters, each with unique attacks, abilities, and an assigned class, and sending them on a mission in which they travel left-to-right, stopping at regular intervals to engage in combat with AI controlled enemies.

The player does not directly control who the characters target, rather they have access to each of the three character's active abilities, limited in their use by a mana and cooldown system. The player can also tell the game to automatically play itself, if they don't particularly need to care about optimal skill use on a mission.

What differentiates it from other gacha games is that the unique heroes obtained in the game are just that - the model of character acquisition is more akin to that of a MOBA like League of Legends, where you simply purchase a character outright (or recruit them from the in-game inn), and once you own a hero, you own them forever, and all character powering up is done via in-game content. Every hero has four abilities, one passive, three active. Each hero can be equipped with a massive variety of weapons, armors and accessories, with each hero also possessing a 'unique weapon' and several 'unique treasures' that when equipped grants them additional bonuses, typically synergistic with their other skills. (Gear acquisition, meanwhile, can be from a gacha mechanic, but it's not the only source of gear, and for armor isn't even the best source.)

Aside from completing story missions, other game modes include the PVP arena and the Co-operative raids against Dragons and World Bosses.

In 2019, Vespa did a collaboration with Dream Catcher for the album Raid of Dream for cross-promotional purposes.

An anime adaptation has been announced for this game, set to premiere in the 2020 Fall season, and featuring the original Japanese voice actors reprising their roles. Here is the first teaser