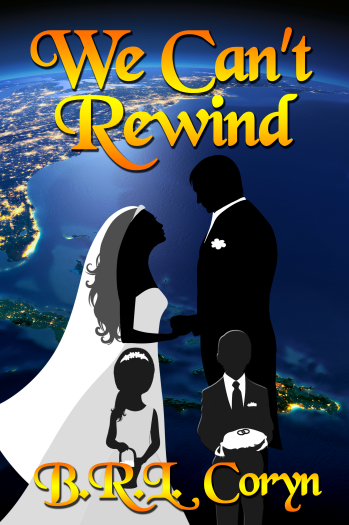 As indicated, they're newlyweds; all four of them.
We Can't Rewind by B.R.L. Coryn is ostensibly a Paranormal Romance, since it focuses primarily on the main characters' relationships and how a couple of paranormal events affect them, but it overlaps heavily with a lot of other genres as well. Told entirely from the First-Person Perspective of a man named Don Richards, the story is about how he and his new wife Denise manage to keep their marriage together after their honeymoon cruise gets lost in The Bermuda Triangle and he and she get Freaky Friday Flipped with his son Jackie and her daughter Jaymee, respectively. Unlike so many other stories involving a such a swap, this isn't a Comedy, (Romantic or otherwise), doesn't teach its characters any obvious moral lessons, and (above all) does not switch them back into their proper bodies by the end.