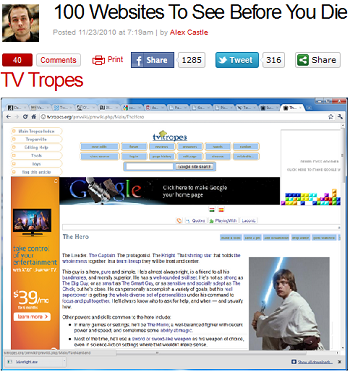 "Oh my god! TV Tropes used one of my quotes!"
— Linkara, review on Daredevil #306 (once again using one of his quotes)
Advertisement:

It's no surprise that the TV Tropes Wiki is one of the most popular websites on the Internet,note (as of the last time we checked, we're 1,524th on Similarweb

) and, equally, it's no surprise that other webpages want to give us a Shout-Out, or that we would want to return the favor by shouting back to the pages that reference us.

Note: Many terms and concepts used on this site have been around since before this site ever even existed, so be sure to check if a reference is definitely about this website before adding it as an example. A mention of the name TV Tropes would count, but just the word "trope", even in the sense we use it, wouldn't.