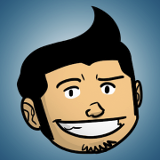 is a Let's Player on YouTube that is known some places as being "the guy who guested on The Runaway Guys' New Super Mario Bros. Wii LP". Josh is fairly popular among the community, with over 100,000 subscribers (and growing). He is also very distinctive, having a style mirroring that of Chuggaaconroy, but with a lot more swearing and sometimes, a lot of very weird sounds

He raced in Super Mario Sunshine Versus against fellow LP'er, AttackingTucans. It now has its own page. He followed this up with a Luigi's Mansion Versus on his channel.

But you knew that already.

Thank you guys for reading this trope page. I've been Josh Jepson, and I'll see you on the next one.