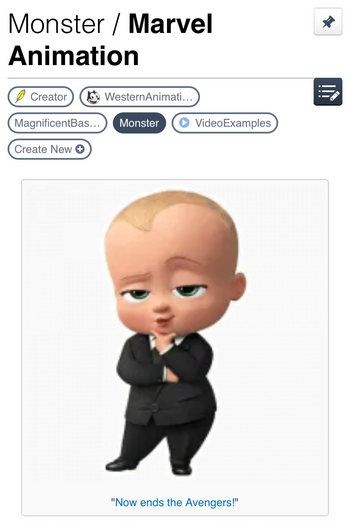 The most sadistic and cruel villain of them all.
This Very Wiki has so many Funny Moments, we even had to split the page! For those from example pages, see: TV Tropes Examples.
Advertisement:

See also Made of Win.

IMPORTANT NOTE: Since anyone can edit this wiki, a lot of the Funny Moments listed here may have been removed or changed (especially if they would technically be considered Natter). Please keep that in mind while reading and/or editing this page.

open/close all folders
Pages in General
Images and Captions
Advertisement:
Trope / Work Descriptions and Stingers
Wild Mass Guessing / Headscratchers
The Headscratchers page for Clue. For some reason pointing out the logical flaws of a board game as if it were a serious murder mystery is funny in and of itself, but at one point, someone postulated "Maybe he explodes when something touches him"

I know it's just a board game and it's all supposed to be abstract, but wouldn't it be really easy to at least narrow down the murder weapon by examining the late Mr. Boddy? Even a kindergartner should be able to tell (for instance) whether or not he had been stabbed, thus ruling the knife in or out
You'd allow a kindergartner to do that?
"Now Molly quit yer crying and tell the police how he died!"