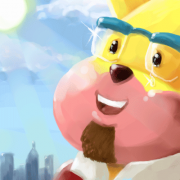 Asperchu is a parody webcomic based upon Sonichu, and to a lesser extent the exploits of Sonichu's author, Christine Weston Chandler. The comic differs significantly from its source material in its portrayal of the original characters from Sonichu. The comic may be found at this link.

In order to gain a better understanding of this webcomic, one may need to both read the webcomic itself and explore the background material.

Compare with A Girl Who Brought Down the World, another work of fiction inspired by Christine Weston Chandler.

As of 2011, Asperchu appears to be dead, although comments indicate that it may start again at some point.