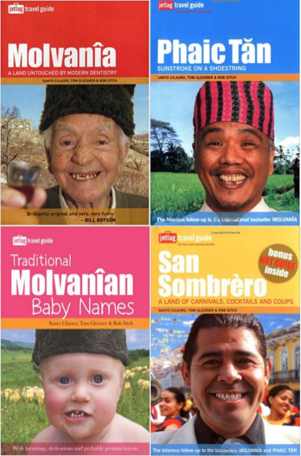 The Jetlag Travel Guides are a collection of books parodying travelling guides, relying on Rapid-Fire Comedy and the perceived stereotypes surrounding the people living in the regions portrayed within. The books were written by Australian comedians Santo Cilauro, Tom Gleisner and Rob Sitch of The D-Generation fame.

The guides all feature a Fictional Country, all exaggerated versions of stereotypes about real-world regions. The first and most well-known of the guides is Molvanîa: A Land Untouched by Modern Dentistry, released in 2003. Its popularity spawned two sequels, Phaic Tăn: Sunstroke on a Shoestring, released in 2004, and San Sombrèro: A Land of Carnivals, Cocktails and Coups, released in 2006, as well as a Spin-Off called Traditional Molvanîan Baby Names: With Meanings, Derivations And Probable Pronunciations, released in 2011.

All of the books look and feel like actual travel books made by real companies, such as Cadogan or Lonely Planet guides, complete with information about history, culture, maps and special offers for other (nonexistent) guides. Some people have even been fooled into thinking the countries present actually exist. Each book features several "contributors", such as Philippe Miseree, who is present in all of the main three guides. The jokes are mostly scatological and sexual in nature, with puns and Bait-and-Switch comments of all kinds being present. The Rapid-Fire Comedy and exploitation of stereotypes will make the reader either suffer from uncontrollable laughter or feel offended.

have been created containing several other countries without physically published guides. In addition, an anthem

for Molvanîa, a clip of a soap opera

for San Sombrèro have been made and uploaded to YouTube. Molvanîa even has an Eurovision entry

The Jetlag Travel Guides provide examples for the following tropes: