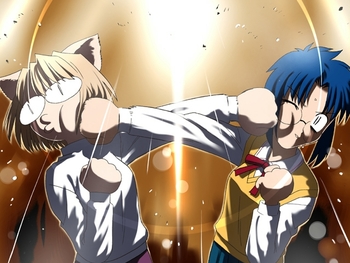 This happens when two fist fighters counter a hook punch by throwing another punch along an opponent's arm, aimed to the face. The result is the two fighters simultaneously punching each other in the face. This is a sometimes comedic way of showing both fighters to be equals in skill and power and sometimes to show that they both have more in common than either of them would like to admit.
Advertisement:

After a Dramatic Pause, to let sink in what just happened, it will typically end with one fighter collapsing to the other's greater Heroic Spirit, or both of them collapsing resulting in a Double Knockout.