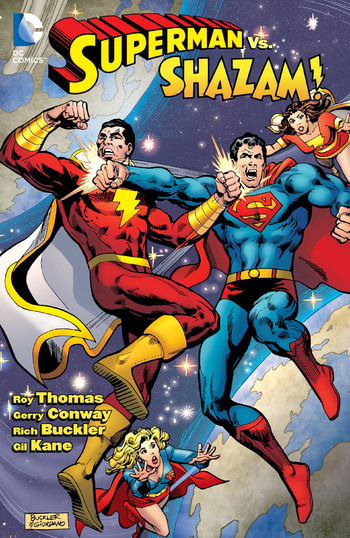 Superman vs. Shazam! or Superman vs. Captain Marvel: "When Earths Collide!" was the first Superman/Shazam! crossover story published in All-New Collectors' Edition Vol 1 #C-58 (May, 1978). It was written by Gerry Conway and illustrated by Rich Buckler.

Several eons ago, a White Martian called Karmang performed a scientific experiment to make himself immortal. He succeeded, but his machine killed one billion Martians whose souls somehow became bonded to him. Since they could not leave the physical world, the legions of murdered ghosts decided to haunt Karmang till he set them free.

One million years later, Karmang -whose resume now includes evil sorcery in addition to mad science- has finally figured out a way to release his victims. But he needs massive amounts of energy, and he is willing to blow two planets up to get it.

Both villains succeed in their tasks, but Supergirl and Mary Marvel quickly realize someone is manipulating their relatives into a battle. As both female heroes investigate who is the puppeteer pulling the strings, Superman and Captain Marvel engage in a brutal battle across the planet.