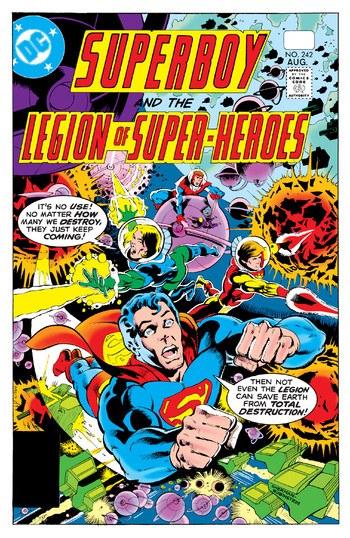 The Legion of Super-Heroes are outmanned and divided as their members try to deal with several crisis simultaneously. Wildfire and his comrades are guarding a conference between the United Planets and the Dominators on Weber's World. Meanwhile, Element Lad leads his remainder teammates against the Resource Raiders, an organization of space pirates which had been previously defeated and has suddenly resurfaced. At the same time, Light Lass and Timber Wolf travel to Winath to find and capture Lightning Lord before he gathers another Legion of Super-Villains.

As Wildfire's team search the perpetrator of several botched sabotage attempts, Element Lad's group find out a disturbing fact. The Raiders are nothing but the forefront of another alien invasion. A vast army of Khunds is heading towards Earth, and not even the Legionnaires can stop it.

In a desperate move, the Legionnaires storm the Khund citadel to face their leader and discover the Khunds are also someone else's puppets. And whoever is pulling the strings is connected with the events on the Weber's World.