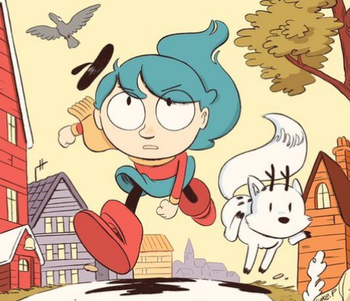 Hilda is a series of graphic novels by British cartoonist Luke Pearson and published by Nobrow Press under their children's imprint, Flying Eye Books.

All of the books revolve around the eponymous Hilda, a bright, adventurous young girl living out in the mountainous wilderness with her mom and deer-fox buddy, Twig.

So far, the series consists of:

The series as a whole is noteworthy of being quite the audience and critic-favorite, praising its visuals and characters, particularly Hilda herself. The second and fourth books are noteworthy for being nominated and winning literature awards from the likes of British Comic Awards and the fourth book itself won the Dwayne McDuffie Award for Kids' Comics in the year 2015.

The Netflix animated series has its own page.

The Hilda series contains examples of these tropes: