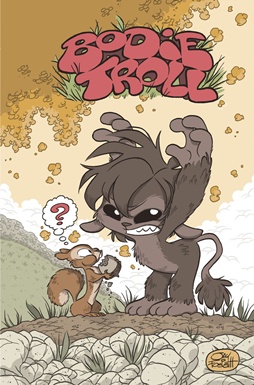 The story takes place in a mystical medieval-like world and the village of Hagardorn. Underneath one of its bridges lives the titular character Bodie Troll. He just has one problem, he's not particularly scary. Not that the town has any problem with it, they actually love the little guy. But this just irks Bodie to no end and he tries to find ways to make the villagers fear him. At least in between the mis-adventures he gets himself into along with his close friend Cholly, a barmaid/aspiring actress and playwright and her fairy godmother (and cook of the tavern they work in), Miz Bijou.

A Free Comic Day issue was released in 2014, with another one following in 2015. Following that came the announcement of a new four part mini-series subtitled "Fuzzy Memories" which continue the adventures of Bodie, Cholly and Miz Bijou. Issue 1 of this came out in 2015, with the promise of the issue two but then thing went quiet and Jay hasn't given any updates on this since.

In 2017 the comic joined the KaBOOM! Comics label.

Bodie Troll has the following tropes