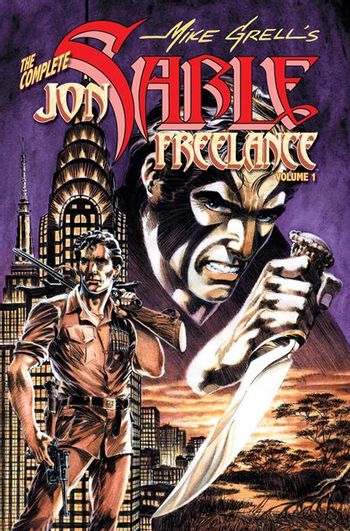 Jon Sable, Freelance was an American comic book, one of the first series created for the fledging publisher First Comics in 1983. It was written and drawn by Mike Grell and was a fully creator-owned title, as were all of First Comics' titles.

Sable was a bounty hunter and mercenary who previously had been an athlete in the 1972 Munich Olympic Games. After witnessing the Munich massacre

at those games, he married a fellow athlete and they moved to Rhodesia, where Sable organized safaris for tourists and later became a game warden. It was during this time his family was murdered by poachers. After getting revenge for his murdered family, Sable returned to America and became a freelance mercenary.

He also had another identity as a successful children's book author, using the name "B.B. Flemm". Unlike many such characters, his literary agent is aware of his secret activities, but also managed to keep Sable on track writing books.

The character was heavily influenced by Ian Fleming's James Bond novels, as well as pulp fiction crime stories. Many of the stories of Sable's hunting exploits in Africa were influenced by Peter Hathaway Capstick's

novels. At a convention in the late 1980s, Grell stated that his idea for Sable was "something like a cross between James Bond and Mickey Spillane's Mike Hammer."

Jon Sable, Freelance lasted 56 issues from 1983 to 1988 before being cancelled. While Grell wrote and did all the covers, he stopped drawing the stories after #44. Late in this run, Grell announced within the comic that Tony DeZuniga would soon become the new artist, but that never came to pass. Another artist came on the book, but the book was soon cancelled, and after a few months, another book just called Sable was launched, written by Marv Wolfman, with art by Bill Jaaska, with Grell having no part. This lasted 27 issues before cancellation.

The comic was adapted into a TV show called Sable, notable only for introducing Rene Russo to audiences as one of the leads. As well, there were a few changes to the premise, with children's author "Nicholas Fleming" being the public face and Sable the mysterious masked do-gooder. Sable was wanted for murder in Africa, it was explained, and the vaguely effete Fleming persona was the only way he could live safely in Chicago. A new character for the TV series was "Cheesecake" Tyson, a hacker friend.

A third First Comics series, Mike Grell's Sable, reprinted the first ten issues of the original Jon Sable, Freelance series. There was also a tie-in miniseries featuring one of the semi-recurring characters, a Classy Cat-Burglar called Maggie The Cat, at Image Comics in 1996. Only two issues were released and the series was never completed.

After the title's cancellation (and First's ceasing operations), the character made some cameo appearances in some of Grell's other titles over the years. He did not receive his own series again until March 2005, when IDW Publishing released the first of a new six-issue mini-series titled Jon Sable, Freelance: Bloodtrail (originally announced as Jon Sable, Freelance: Conspiracy) written and drawn by Grell. IDW have also been reprinting the entire original run in a series of trade paperbacks.

A new series, Jon Sable: Ashes of Eden, was serialized on-line beginning in December, 2007. It was published as a five-issue miniseries by IDW in 2009-2010.

Grell wrote a prose novel featuring the character, simply titled Sable, which was published in hardcover in 2000 and in paperback in 2001. The book was partly adapted from early issues of the comic series, with some changes in chronology.