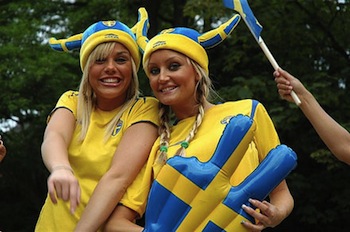 Some very pretty Danish girls.note They're actually Swedish. Denmark's national colors are red and white
"My name is Inga, and I'm from Sweden,
I could fall in love with you!
If you meet me, on Ibiza,
I can show you how to party too!"
— Inga From Sweden, "My Name is Inga"
Advertisement:

A sort of generic northern blend of the Faroe Islands, Norway, Iceland, Greenland, Sweden, Denmark and Finland. note In a few truly horrible examples, Sweden and Switzerland are conflated, even though Switzerland is Alpine, not even vaguely Scandinavian. The same thing occasionally happens to Denmark and The Netherlands (due to the words "Danish" and "Dutch" sounding vaguely similar.) Everyone is liberal, blond and absolutely gorgeous. The streets are clean, the people are intelligent and creative, it always snows, they have Ikea and saunas, and the area pumps out an amazing amount of hot foreign exchange students (both male and female) with cute accents to tempt American high school students. The chances of meeting a pair of beautiful, buxom, blonde twins who won't rule out a Twincestuous threesome with any given tourist is uncannily high. Everything is ridiculously expensive by the standards of anywhere else (including the rest of Europe), but that's OK because higher education is free and so is health care.

Everyone either skis or snowboards and eats a lot of chocolate. About the only other thing anyone remembers is that LEGO was invented there. The region is also known for having a thriving metal scene (Black Metal in Norway and Death Metal in Sweden especially) and video game sector (Sweden especially makes many of the most popular modern video games, including Minecraft, the highest selling video game of all time).

On the rare occasions when negative stereotypes of Scandinavians are shown, the stereotype of choice is to portray them as painfully naïve. Finns (whose language is Uralic like Estonian and Hungarian, rather than Indo-European like most other European languages) are known to be violent when their Berserk Button is pressed.

Technically Icelanders and Faroe Islanders are not "Scandinavian" either, as the strict definition of Scandinavia is only Sweden, Norway and Denmark. The preferred term is "Nordic" which also includes Greenland and Svalbard. Icelanders and Faroe Islanders speak Scandinavian (AKA North Germanic) languages, however. Meanwhile, Greenland is owned by Denmark and has a long history of Norse settlement, but it, on top of being located in North America instead of Europe and not being Scandinavian, is mostly populated by the racially and linguisticallynote The Eskimo-Aleut languages, of which Greenlandic Inuit is a part, are concentrated in North America different Inuit people, therefore it is more of an Eskimo Land than Nordic.

Going back a little farther in time, one might have seen the region crawling with Valkyries, Vikings and trolls.

Named for a certain port of The Lost Vikings II, which in turn is a reference to a Hitchcock film.

The Nordic Noir genre deconstructs this trope. Though Scandinavia is prosperous and well-organized, it is not devoid of crime.