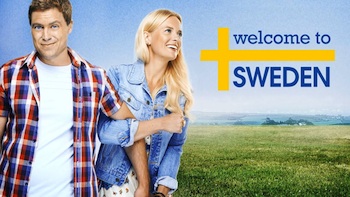 Love is universal. The rest is lost in translation.
Advertisement:

Welcome to Sweden is a Swedish sitcom that is about Bruce, an American accountant, who becomes disillusioned with his career and life in New York and decides to follow Emma, his Swedish girlfriend, when she moves back to Stockholm. Most of the show revolves around how Bruce attempts to adapt to life in Sweden while trying to find a new purpose and how the Swedes around him react to this Funny Foreigner who recently arrived in their country.

It stars Greg Poehlernote brother of Amy Poehler, who is also the show’s executive producer and appears in several episodes as a comedic version of herself as Bruce and Josephine Bornebusch as Emma, along with Lena Olin and Claes Månsson as Emma’s parents: Viveka and Birger.

The show is produced by TV4 in Sweden and is also run by NBC as a summer series. A second season aired in 2015, but the series was canceled mid-way through. The episodes remaining were put up on NBC's website.