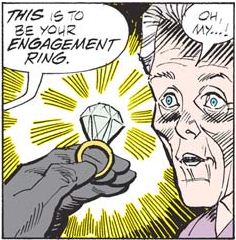 A woman receives an engagement ring, and it's huge, so much so that she has a major reaction to it. It shows that her fiance either makes some major money or otherwise is a major criminal. She may love it (possibly showing it off to everyone); a more down-to-earth character may think it's just too much to accept. Even if the character can't accept something so extravagant, she may take one last look at how beautiful it is before giving it back.

If hijinks ensue, see With This Ring. Sometimes paired with a fancy Fairytale Wedding Dress should the wedding actually happen.

Compare to Treasure Is Bigger in Fiction, where gemstones in general are much larger than phony old reality, and the ring might be extremely big, but nobody in-universe thinks it's unusual.

As what constitutes a "huge" ring is subjective, this is an in-universe trope. A character must react either verbally or physically to the size of it.