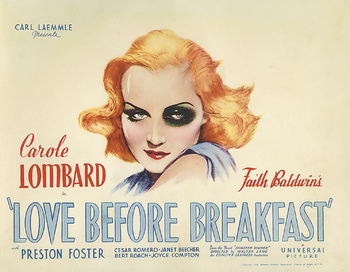 The black eye was an accident, honest!
Love Before Breakfast (1936) is Romantic Comedy starring Carole Lombard, Preston Foster, and Cesar Romero. This film was directed by Walter Lang, and includes Preston Sturges as one of the uncredited writers.

Millionaire Scott Miller (Foster) wants to romance socialite Kay Colby (Lombard), so he sends her fiancé, Bill Wadsworth (Romero), to Japan and tries to weasel his way into a relationship.

Kay is not impressed by his entitlement, or the fact that he sent her philandering fiancé thousands of miles away. She calls Scott out for what he is: a “button pusher” who thinks he can get everything he wants by following her around and declaring his love for her wherever she goes. Of course, he doesn’t take her various nos for an answer.

Eventually, he gives up and tries to only make Kay jealous. It works, but Kay will never admit her growing love or give an inch to his demands.

Screwball hijinks ensue when Scott decides he won’t give an inch either.