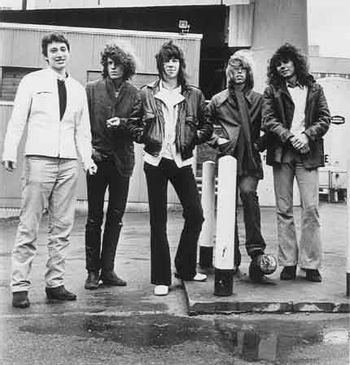 "That's right!"
— Jonathan Richman in every one of his songs.
Advertisement:

Legendary Proto Punk band from Massachusetts. The members consisted of Jonathan Richman and whatever musicians felt like working with him. Seriously, he's the only official member of the band.

They started in 1970, trapped in obscurity. They recorded a few songs for an album that never got off the ground. They then disbanded, and got back together in 1976. This time they succeeded in releasing the album, with both the original tracks and some new ones they recorded. The self titled album is considered a precursor to Punk Rock.

After the album, Jonathan Richman started working with other musicians using The Modern Lovers name. They remained a footnote up until fairly recently, when they received recognition for being (along with the Velvet Underground and The Stooges) one of the earliest inspirations for Punk Rock. They're even given credit for jump-starting the Straight Edge movement with the song "I'm Straight," one of the earliest examples of the genre.

Richman is also a familiar face in several films by the Farrelly Brothers. Along with Tommy Larkins, he serves as the Greek Chorus in the movie There's Something About Mary, sings the song "As We Walk to Fenway Park" in Fever Pitch, and has a brief role in Kingpin.

Two early members of the Modern Lovers had success with other New Wave Music bands. David Robinson became the drummer of The Cars. Jerry Harrison joined Talking Heads as a keyboardist/second guitarist.

Oh and their music is catchy and energetic. Think of Jonathan Richman being a less monotonal version of Lou Reed and add a touch of romanticism.

"I say Roadrunner once, roadrunner twice, I'm in love with TV Tropes and I'll be out all night":