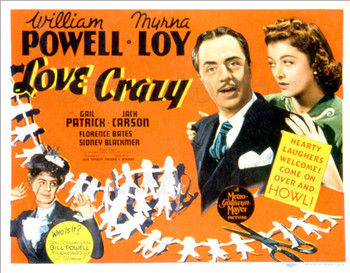 Love Crazy is a 1941 film directed by Jack Conway, starring the most famous Those Two Actors pair of all time, William Powell and Myrna Loy.

Powell and Loy are Steve and Susan Ireland, a married couple who are celebrating their fourth anniversary. They are happily married to an absurd degree, with the only fly in the ointment being Susan's annoying mother, Mrs. Cooper, who hates Steve.

Naturally, they break up. A series of comic misunderstandings on their anniversary, mostly dealing with the presence of Steve's old girlfriend Isobel (Gail Patrick), now their new neighbor, lead to Susan walking out. She takes up with another neighbor, champion archer Ward Willoughby (Jack Carson), while waiting out the necessary period to get a divorce. Steve is helpless to prevent the divorce, until his lawyer reminds him of one legal loophole: a spouse judged to be insane cannot be party to a divorce. Comic hijinx ensue as Steve sets out to convince the world that he is crazy in order to hold on to Susan.

Elisha Cook Jr. has a small role as the elevator operator.