Film / The Loved One 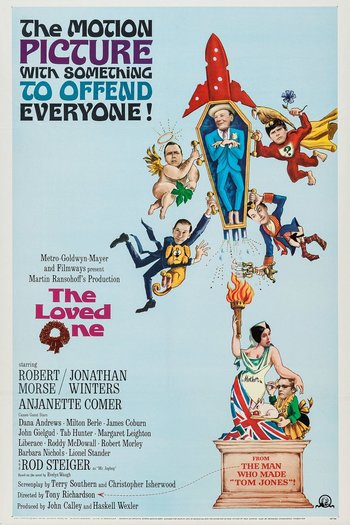 "I can give you our eternal flame in either Perpetual Eternal or Standard Eternal."
Advertisement:

The Loved One is a 1965 satirical Black Comedy film directed by Tony Richardson (as his follow-up to Tom Jones), based on the short novel by Evelyn Waugh.

But with Terry Southern on-board as co-writer, fresh off Dr. Strangelove, it adds plenty more characters, hijinks and irreverence. A notable change from the book is the character expansion of the owner of the Whispering Glades Memorial Park, Reverend Wilbur Glenworthy (Jonathan Winters), a classic shameless huckster who wraps himself up in piety while chasing money. After his brother Henry (also Jonathan Winters) loses his job at a film studio, Wilbur sets him up to work at The Happier Hunting Ground, a pet mortuary that the Reverend secretly runs on the side.

By the end, besides the funeral business, the film gets in some potshots at Hollywood, religion, patriotism, the English, the military, and NASA as well.

Famously marketed as "The motion picture with something to offend everyone!", its bizarre humor was too far ahead of its time and it became a Box Office Bomb, but is now considered a Cult Classic.

"Tropes have become a middle class business. There's no future in them.":