Literature / The Loved One 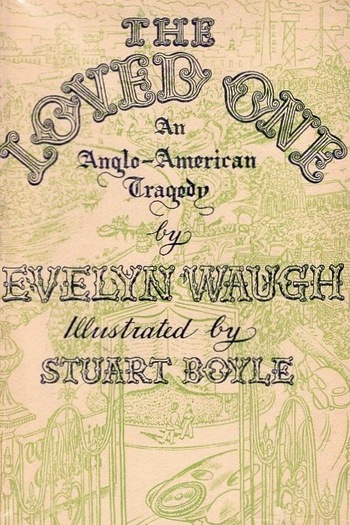 The Loved One: An Anglo-American Tragedy is a 1948 satirical short novel by English author Evelyn Waugh.

Young aspiring poet Dennis Barlow leaves England and goes to Los Angeles, hoping to get a job as a screenwriter. He stays with his uncle, Sir Francis Hinsley, who now works at Megalopolitan Studios. To make ends meet he gets a job at The Happier Hunting Ground, a mortuary and cemetery for pets. This horrifies the image-conscious members of Hollywood's tight-knit British expatriate community, led by pompous character actor Sir Ambrose Abercrombie. They urge Dennis to get a more respectable job, but fail.

Inspired by Waugh's experiences in Hollywood working on an abortive attempt at a film adaptation of Brideshead Revisited, he aimed his satirical arrow at both the pretensions of British expatriates and the vapid materialism of Southern California.

It was adapted into a film in 1965, directed by Tony Richardson, written by Terry Southern and Christopher Isherwood, and starring Robert Morse alongside an All-Star Cast. Parts of the classic-era Doctor Who serial "Revelation of the Daleks" also drew inspiration from the novel.