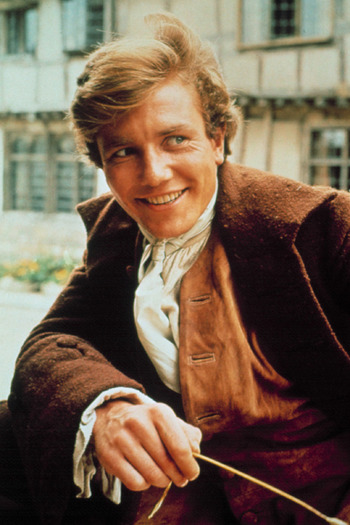 Tom Jones is a 1963 British historical comedy film directed by Tony Richardson, boasting a screenplay by John Osborne and an All-Star Cast.

It is an adaptation of novel The History of Tom Jones, A Foundling by Henry Fielding. The film begins with Squire Allworthy (George Devine), a minor country landowner, coming home to his estate and finding an infant child in his bed. Believing that the child belongs to a servant girl of his named Jenny Jones, Allworthy raises the boy, christened Tom Jones, as if he were the squire's own son.

Some years later Tom (Albert Finney), having grown into a dashingly handsome, charming man, is a Casanova who has great success with women. However, although he was raised as if he were Squire Allworthy's son everyone knows he's illegitimate, and he thus cannot marry the one woman he truly loves, the beautiful Sophie Western (Susannah York). Sophie loves Tom in return, but her father Squire Western (Hugh Griffith) instead matches her up with Allworthy's nephew Blifil (David Warner), son of Allworthy's sister Bridget. Blifil is an obnoxious jerk, but he's a legitimate son of a respected man, so Tom is out of luck.

Eventually Tom goes to make his way in the world. After some adventures he meets one Mrs. Waters (Joyce Redman), who knows some things about who Tom's real parents are.

David Warner makes his film debut as Blifil, starting out on a long career of playing creeps and psychos. Julian Glover, who also specialized in playing villains, make his first appearance as the loathsome cavalry officer Northerton. Lynn Redgrave also debuts as a surly barmaid.

No connection to singer Tom Jones except that the former Thomas Woodward took his stage name from the book/film.