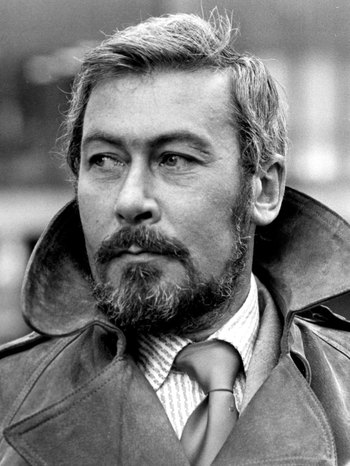 Osborne was the son of a copyright artist (who died when Osborne was twelve years old) and a Cockney barmaid, with whom he had a difficult, often hostile relationship. He attended Belmont College in Devon and briefly worked as a journalist before drifting into acting. While working as a repertory performer, he began writing and submitting his first plays.

Osborne's first two plays, The Devil Inside Me and Personal Enemy, were produced in the mid-50s without much fanfare (though the latter, due to its depiction of McCarthyism and homosexual content, encountered censorship issues). Then he met George Devine, producer of London's offbeat Royal Court Theatre. Devine commissioned Osborne for a play, and Look Back in Anger, produced in 1956 and directed by Tony Richardson, was the result.

Osborne followed Anger with several other successful works: Epitaph for George Dillon (written before Anger, but not produced until afterwards), about a perpetually frustrated writer; The Entertainer (starring Laurence Olivier in its original run), about a seedy musical hall entertainer whose family unravels along with his career; Luther, a play about Martin Luther starring Albert Finney; Inadmissible Evidence, featuring Nicol Williamson as depressed, delusional barrister Bill Maitland; and A Patriot for Me, another historical play about Austrian spy Alfred Redl.

Along with frequent collaborator Tony Richardson, Osborne cofounded Woodfall Studios, a major player in the British New Wave of the early '60s. Besides film adaptations of Look Back in Anger (starring Richard Burton) and The Entertainer (with Laurence Olivier reprising his stage role), they also collaborated on Tom Jones, which won Oscars for Best Picture, Director and Adapted Screenplay. However, their partnership unraveled during the Troubled Production of The Charge of the Light Brigade; Osborne refused Richardson's demands to rewrite his original script, and the two had a bitter falling out.

While Osborne continued writing well into the 1980s, his later works (Hotel in Amsterdam, Watch It Come Down, Deja Vu, a sequel to Anger) didn't receive the same acclaim or attention. Osborne continued acting sporadically, with notable appearances in Get Carter and Flash Gordon, among others. He published two volumes of memoirs (A Better Class of Person and Almost a Gentleman) and died of complications from diabetes in 1994.

Osborne became as well-known for his explosive, often-violent temperament as his writings, fully embracing the Angry Young Man moniker. He quarreled frequently with collaborators, critics and fellow playwrights, and often published public letters criticizing English society. His most famous writing on this score, "Damn You England," attacked Britain's political and religious leadership for their role in the Cold War and nuclear arms race; he was arrested at a Committee for Nuclear Disarmament protest in 1961 with Bertrand Russell, Vanessa Redgrave, Robert Bolt, and others. Later in life he became a supporter of Margaret Thatcher and redirected his anger at the Left.

Osborne was married five times: to actresses Pamela Martin and Mary Ure, to screenwriter and critic Penelope Gilliatt (with whom he had a daughter, Nolan), to actress Jill Bennett, and journalist Helen Dawson. He was often accused of misogyny both for the content of his plays (which rarely depicted women in sympathetic lights) and his relationships; in particular, he had an emotionally abusive marriage to Jill Bennett, even comparing her to Adolf Hitler upon the latter's suicide. After his death, fellow playwright Anthony Creighton (who collaborated with Osborne on Epitaph for George Dillon) claimed that he and Osborne had an affair in the mid-'50s, though Osborne's family denied it.

Many of Osborne's works have received film adaptations. Look Back in Anger has been filmed numerous times, with everyone from Richard Burton to Malcolm McDowell and Kenneth Branagh as Jimmy Porter; two versions of The Entertainer, one with Olivier and the other featuring Jack Lemmon; Inadmissible Evidence, with Nicol Williamson reprising his stage role; and Luther, starring Stacey Keach. Istvan Szabo's Colonel Redl, starring Klaus Maria Brandauer, is an In Name Only adaptation of A Patriot for Me. Osborne's memoir, A Better Class of Person, was adapted into a television film starring Eileen Atkins.

Not to be confused with the guitarist for Brothers Osborne.

John Osborne works on this wiki: