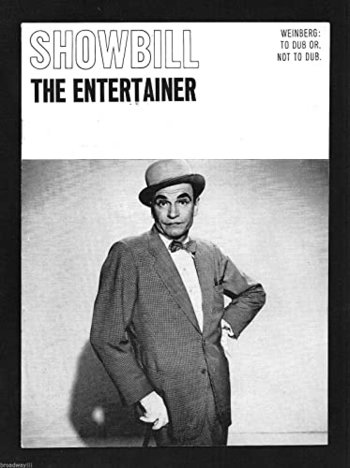 The Entertainer is a play by John Osborne, first produced in London in 1957.

The play follows Archie Rice, a middle-aged British music hall performer whose life and career seem to be falling apart. With his youngest son fighting in Egypt, his daughter visiting from London, and his aging father (himself a retired song-and-dance man) overshadowing him, Rice struggles in increasing desperation to revive his career in a word that appears to be passing him by.

The original run of the show starred Laurence Olivier, for whom the show was written. It was a triumph for the actor, gaining him a new generation of fans and proving he was still relevant as an actor in more modern drama as opposed to the classics that had made him a star. Later revivals of the show have starred such actors as Max Wall, Peter Bowles, Robert Lindsay, and Kenneth Branagh.

The play has been adapted to the screen twice: as a 1960 feature film directed by Tony Richardson, with Olivier reprising his role as Rice (gaining an Academy Award nomination for Best Actor in the process), and again as a 1976 Made-for-TV Movie that changes the setting to America and features Jack Lemmon in the lead.

Tropes Associated With this Play Include