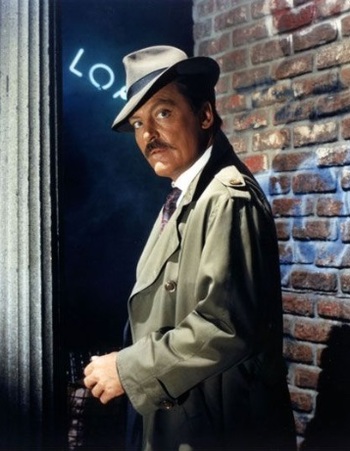 Keach as Detective Mike Hammer
"I wanted to be Laurence Olivier, basically, to be a great classical actor, and also be able to do modern things."
Advertisement:

Walter Stacy Keach, Jr. (born June 2, 1941 in Savannah, Georgia) is an American actor and narrator, son of longtime television actor Stacy Keach, Sr., and older brother of actor, director, and producer James Keach. Often cast as powerful, imposing authority figures due to his commanding voice and wide frame (in addition to occasionally sporting a moustache somewhere on the Powers Boothe scalenote grown to hide a cleft palate scar), Keach has won critical acclaim throughout his varied career. He's also led a rather interesting life which includes a struggle with cocaine addiction, a prison sentence in Reading Prison and a conversion to Roman Catholicism followed by his son being blessed by Pope John Paul II. Also, despite the fact that he often plays mean characters, he's considered to be one of the sweetest men in Hollywood and has the ability to turn the driest line into a gut-busting punchline with his delivery alone.