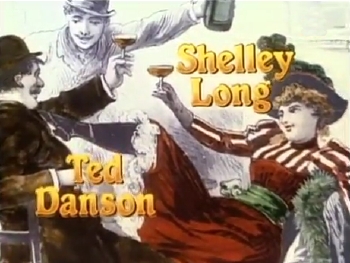 Also known as "staggered" or "staggered but equal" billing. When two stars of equal prominence star in a movie together, in posters and credits billing, the two names may be staggered next to each other on the same title card — with the one on the left being lower, the one on the right being higher. This way, reading left to right gives one actor prominence, and reading top to bottom will give the other prominence. "Staggered but equal billing" serves to avoid causing tension between the two A-list lead actors over who is more important. Often, they will receive the same payment for their roles as well.
Advertisement:

In Film Posters, another result of a billing conflict could be a Misplaced-Names Poster. If it happens when their roles aren't equally important, it could be a case of Billing Displacement.

Diagonal billing became popular when it was used in The Towering Inferno, with Paul Newman and Steve McQueen. They also received the same salary and the same number of lines (at McQueen's insistence). The idea was originally proposed when it was thought that Newman and McQueen would star in Butch Cassidy and the Sundance Kid, but dropped when Robert Redford was cast instead of McQueen.

A variation of staggered billing can be seen on some TV series. Instead of two leads sharing the same title card, they alternate who is billed first from episode to episode.

"Should We Get Started?"

The show is introduced with Chastain as Mira sitting down next to Isaac as Mira's husband Jonathan, the other protagonist. The scene flashes to their names arranged diagonally, then the title.

"Should We Get Started?"

The show is introduced with Chastain as Mira sitting down next to Isaac as Mira's husband Jonathan, the other protagonist. The scene flashes to their names arranged diagonally, then the title.