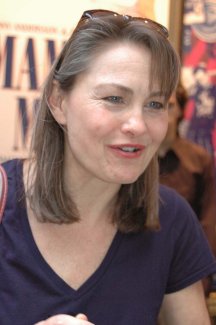 Cherry Jones (born November 21, 1956 in Paris, Tennessee) is a two-time Tony award winner and one of the grande dames of the Broadway stage.

She has also appeared in supporting roles in several notable films, including The Horse Whisperer, Ocean's Twelve, Signs, The Cradle Will Rock, and The Eyes of Tammy Faye, among others.

However, her most extensive and impressive body of work is on the Broadway stage. Her list of theatre credits include Angels in America, The Heiress (for which she won a Tony award) and Doubt (ditto). She is, with very good reason, renowned as one of the country's greatest theatre talents.

She rose to prominence in the role of the staunch, idealistic President Allison Taylor on the hit television series 24, beginning with the show's seventh season, and quite decidedly proved that a 24 President doesn't have to be named David Palmer to be interesting. It clearly worked, as she won an Emmy for the role.

Later she starred as Dr. Judith Evans on NBC drama Awake, a series which was cancelled after 13 episodes. She's also guest-starred as Nan Pierce in Succession.

A Tennessee native, she graduated from the Carnegie-Mellon School of Drama.

She also caused quite a stir by removing her name from Emmy contention in 2010. She claims it has nothing to do with the rather spectacular mishandling of Allison Taylor's character during season 8.

She currently is playing Dorothea Dix on PBS's Mercy Street, and in Five Days At Memorial.