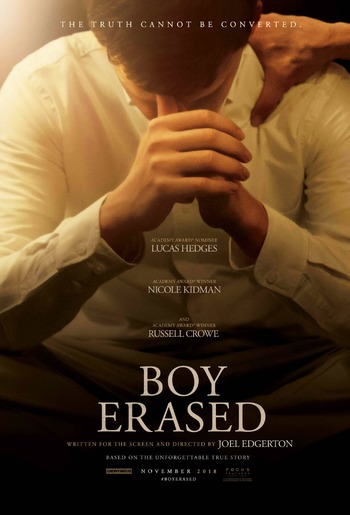 Boy Erased is a biographical drama film written and directed by Joel Edgerton and based on the memoir of the same title written by Garrard Conley.

The movie stars Lucas Hedges as Jared Eamons, the gay teenage son of a Baptist preacher (Russell Crowe) who after being outed is forced to join a conversion therapy group. The movie co-stars Nicole Kidman as Jared's mother, Nancy Eamons; Joel Edgerton as Victor Sykes, the leader of the camp; Flea as Brandon, a counselor at the camp; and Troye Sivan and Xavier Dolan as fellow members of the camp.

The movie was released on November 8, 2018. The trailer can be seen here