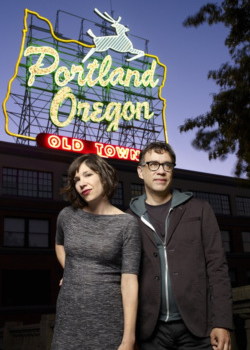 The Dream of the '90s is ALIVE in Portland!
"Portland is where young people go to retire."
— Jason from L.A.
Advertisement:

Portlandia is a sketch comedy show that ran on IFC from 2011 to 2018 starring Fred Armisen and Carrie Brownstein. It is set in Portland, Oregon and most of its humor comes from mocking the city's hipster culture, centering around various characters played by Armisen (one-time drummer for Post-Punk band Trenchmouth