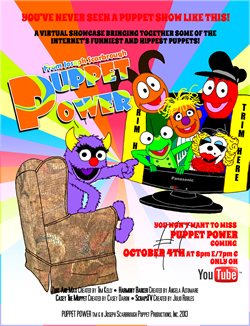 Hosted by Steve D'Monster , the special featured other YouTube puppet acts starring in their own short segments; these include Zook and Max - an alien and a "meanie" who are Vitriolic Best Buds; Harmony Barker - a roaring twenties-inspired showgirl dog; Casey the Muppet - the self-proclaimed world's biggest Muppet fan; and ScrapsTV - a Boston-based puppet troupe comprised of Muppet-inspired characters.

Their respective segments featured in the special are as follows:

Despite heavy promotion and enthusiam for the special, it was met with little fanfare upon its initial release on October 4, 2013. The special can be watched here

This special provides examples of