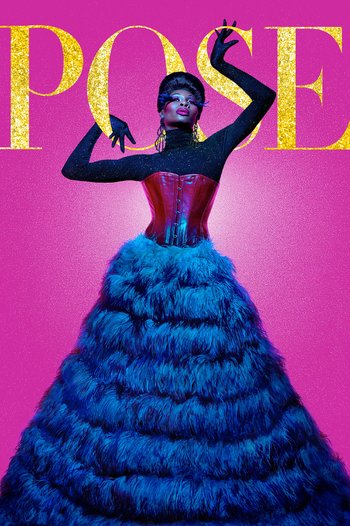 The category is... live... werk...
"A ball is a gathering for people who are not allowed to gather anywhere else."
— Blanca
Advertisement:

Pose is a series created by Ryan Murphy that aired on FX.

The year is 1987. Ronald Reagan is still President, Donald Trump is one of the most influential men in New York City, and the AIDS crisis is in full swing. In the midst of this dark and troubled time, ball culture offers an outlet for NYC's marginalized gay community, allowing them to forget their troubles for a little while. And ruling over the ballroom scene is the House of Abundance, led by Elektra.

However, when one of Elektra's followers, Blanca, learns that she has HIV, she decides to leave Abundance to start her own house. She is soon followed by Angel, who was cast out of Abundance, and Damon, a young gay newcomer who aspires to be a dancer. Together, they plan to challenge the House of Abundance and take its place as the leader of the ballroom community.

Season 2 fast forwards to 1990. Madonna brings the song "Vogue", which becomes the hottest song worldwide, giving the gay community a spot in the mainstream. However, the HIV/AIDS epidemic has gotten worse, especially in NYC, and violence against trans women of color is even more dangerous. Blanca struggles with her worsening HIV symptoms, becomes a nail salon owner, and gets into a feud with Frederica Norman, a vicious homophobic and racist tycoon. She also tries to give her children (Angel, Lil Papi, and Damon) the steps on being more independent and taking charge of their own lives.

The series's third season takes place in the first half of the 1990s, in which the characters are experiencing new opportunities as well as starting to see the first signs of the AIDS epidemic slowing down. Pray Tell's HIV has developed into full-blown AIDS, however, and he starts to make the most of what time he has left. The third season was the final season that aired throughout May-June 2021.