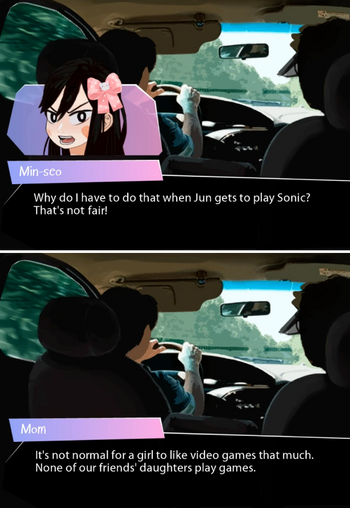 "When are you gonna realize you have a daughter with breasts, not a son? ... No boy's gonna go out with a girl who's got bigger muscles than him!"
— Paula Paxton, Bend It Like Beckhamnote who'd obviously never heard of an Amazon Chaser
Advertisement:

Sometimes parents with a tomboyish daughter or a feminine son will be upset at their child not conforming to gender roles. It's usually the parent of the same sex as the child that gets more agitated. They will often cry, "Why Couldn't You Be Different?"

It's common for the father to try to "man up" his son by putting him on a sports team or taking him hunting, while a mother will try to get her daughter to wear more dresses or take up "feminine" interests like cooking or sewing. Any attempts to change their kids' behavior will usually fail spectacularly. In the worst cases, the parent's disapproval of gender nonconformity can result in Honor-Related Abuse.

This may be experienced by a Jock Dad, Nerd Son or a Feminine Mother, Tomboyish Daughter pair, and is typically the cause of a "Gender-Normative Parent" Plot. Contrast You Go, Girl!, where the parents are generally neutral to supportive. Can lead to Trans Tribulations for transgender/non-binary children, or Intersex Tribulations for intersex children, and often also overlaps with various kinds of homophobia on the parents' part, whether the child is actually homosexual (or bisexual) or not. Raised as the Opposite Gender is an inversion that occurs when parents want their child to live as the opposite gender; compare Wanted a Son Instead.

Parents who humor or even encourage their children's eccentric interests may instead be Exceptionally Tolerant, depending on how unusual this would be in the context of the story.