Western Animation / Once Upon a Forest 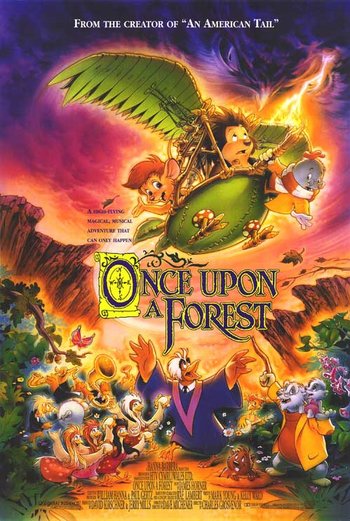 Once Upon a Forest is a 1993 animated film with an environmental theme, released by 20th Century Fox. Based on the Furlings characters created by Rae Lambert, it was directed by Charles Grosvenor and produced by David Kirschner, the creator of the An American Tail and Child's Play franchises. It was made by Hanna-Barbera in association with HTV Cymru Wales.

The film tells the tale of three forest denizens—a headstrong mouse named Abigail, a carefree hedgehog named Russell and a timid mole named Edgar—that go on an expedition to cure their badger friend, Michelle, who became sick from chemical fumes which leak into the forest due to human carelessness. But unlike many of the Green Aesops of the era, the humans are portrayed as redeemable in the end.

It remains largely obscure and a commercial flop (only making back about half its budget, and this was partly thanks to it debuting a week after Jurassic Park), though it does have a small following among fans who saw it as children and still remember it.

Once Upon a Forest provides examples of the following tropes: