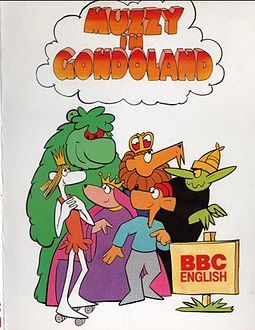 Muzzy in Gondoland is an animated film created by The BBC in 1986 for the purpose of teaching English both to young children and as a second language. It stars a green furry metal-eating alien called Muzzy, who lands his spaceship in Gondoland, a country mainly inhabited by dogfaces. He gets arrested for eating parking meters, and in the jail he meets and befriends Bob the Gardener, who is imprisoned by the King of Gondoland for trying to elope with his daughter, Princess Sylvia. Meanwhile, the King's evil scientist Corvax, after failing at making Princess Sylvia fall in love with him, uses his computer to create a copy of her — just to mess it up and accidentally create lots of copies of her. It's up to Muzzy and Bob to bust out from prison and stop the chaos.

The main plot is interrupted through and through by short segments featuring a human called Norman. These segments are usually for explaining or showing other examples of the language and grammar used in the scene they follow.

Since the main purpose of the movies is language education for beginners in an entertaining way, they have very simple grammar. Spanish, German, French, Italian, Chinese, Esperanto, Portuguese, Romanian, and Russian versions are also available. Both films were released on TV in series format as well, split up to 20 episodes.