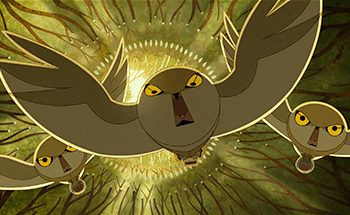 Owls are, to put it bluntly, creepy. They just are. Perhaps it's because most of them are nocturnal or that they eat cute little mice or that they can spin their heads all the way aroundnote Not really, but they can turn their heads further around than most animals (270 degrees total compared to 180 degrees for a human). And then snap their heads around to the other side so quickly you could be forgiven for thinking they'd actually gone 360. It could be those (relatively) gigantic, piercing eyes. Or perhaps it's the sounds they make at night (except for the beating of their wings, which are so soft and fluffy you'll never hear a thing. Bad news for rodents), in the dark, when you're in the forest.

It doesn't really matter why they are creepy, they just are. Owls have long been viewed as harbingers of disease, death, destruction, and bad luck. To the Hopi, they were a symbol of evil sorcery; to the Romans, they were funerary birds, signaling ill will in the daytime (unless you were collecting their eggs, in which case they signaled a Hideous Hangover Cure); and the Aztec god of death, Mictlantecuhtli, was often portrayed with owls. Geoffrey Chaucer also had a thing for them.

So remember: if you ever see an owl, clutch your Tootsie Roll Pops tightly and run in the other direction.

See also Brutal Bird of Prey, Creepy Crows, Vile Vulture, and Circling Vultures for other types of scary, creepy birds, as well as Bat Out of Hell for another scary nocturnal flyer, and The Owl-Knowing One (for when the owl is an Evil Genius). Contrast Cute Owl (though there might be some overlap when Cute Is Evil).