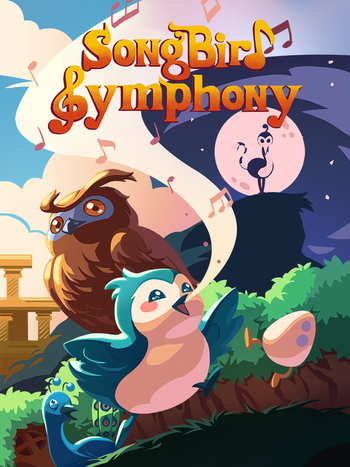 SongBird Symphony is a video game alternating sections of Platform Game and Rhythm Game developed by Joysteak Studios. It was released for PC, Nintendo Switch and PlayStation 4 on July 25, 2019.

You play as Birb, a young chick living with Uncle Pea the peacock. Realising he's probably not a peacock himself, Birb decides to go looking for his origins. He seeks help from the Owl, said to be the wisest bird of the whole forest. The Owl shows Birb an artifact he holds that can grant any wish, and says that they can use it to find Birb's parents, but it needs six notes from the birds around the forest to function. The Owl already has two and sends Birb to find the rest. On his journey, Birb, accompanied by the unhatched chicken Egbert, meets many birds of several species and tries to help anyone needing a wing. But not all the birds are friendly, for the mysterious Masked Bird, leader of a gang of Magpies, aims to stop Birb from getting the notes.

The whole game revolves around music, and not only during the Rhythm Game sections. Birb needs to sing to activate moving blocks during the Platform Game sections, helping him reach new zones or solve puzzles, and most of his accomplishments unlock notes which in turn add new notes or instruments to the soundtrack. The Rhythm Game sections use several kinds of gameplay you discover along the plot, and alternate moments when you have to input notes with characters singing (the game is not voice acted, but you have karaokes).

The official page of the studio can be found here