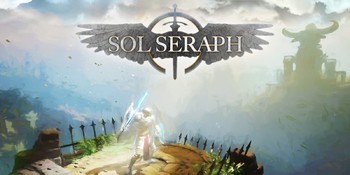 A Spiritual Successor to ActRaiser by Ace Team (Zeno Clash & Rock of Ages) and published by Sega. SolSeraph follows the beat of its predecessor. Mother Earth and Sky Father created the world, populating it with all manner of life, before leaving it on its own. The younger gods proved to be cruel, tormenting and playing with humans, scattering the human tribes. Luckily for the humans, Helios, Knight of Dawn, the child of god and man comes to their aid, guiding the human tribes to rebuilding their civilisations, and taking to the field to slay the dark creatures threatening them, and facing the Young Gods controlling these creatures.

Like its predecessor SolSeraph will feature both action platforming and a strategic side, as players use Helios to defeat creatures in their lair, before building each tribes' town. Each tribe will feature distinct units and buildings they can produce, and thus each will tackle challenges differently.

Yuzo Koshiro, who composed the music for ActRaiser is scoring the new game with Jonas Kyrazes (The Talos Principle) writing the narrative. The game was released on PC, PlayStation 4, Xbox One and Nintendo Switch on July 10th 2019.