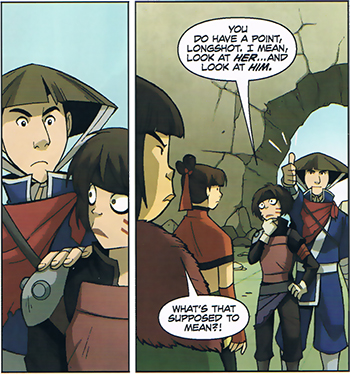 "Heh, you don't say much, friend, but when you do, it's to the point and I salute you for it!"
— Big Dan Teague, O Brother, Where Art Thou?
Advertisement:

A speechless (or nearly speechless) Stoic who can hold entire conversations without saying a word. Usually, they'll look soulfully, blink, raise an eyebrow, or make another otherwise minuscule gesture and get their point across. In fact, they're usually better at communicating nonverbally than most of us are at communicating verbally.

This can overlap with any stereotypically quiet character type: The Voiceless, The Quiet One, the Silent Snarker, or the Heroic Mime. What matters is their uncanny ability to communicate complex thoughts non-verbally.

This can be done to preserve the badass factor of a speechless character without sacrificing his ability to communicate. Or it can be played for laughs, with other characters responding to the quiet guy's looks as if they're long, poignant soliloquies on the nature of love, life, or liberty. They may even inspire the odd Placebo Eureka Moment. More often than not, it turns into a Bilingual Dialogue with the other person just not talking.

Another aspect of this trope is that it's normally incredibly significant when these characters speak; either they have something profound to say which will give the heroes incredibly useful insight, or another character's irritant tendencies are thrown into sharp relief when they manage to push The Stoic to the breaking point and he loses his temper, or the character's silence is a joke, and whatever they have to say is the punchline thereof. No matter which it is, the fact is that the other characters always find it to be of note when the Silent Bob does deign to speak.

Very commonly a trait of the Optional Party Member, as he/she is often added at the last minute or as an extra feature in a port (or is deemed simply too much trouble to add to the script) and is given very little or no dialogue. However, what little they do say, no matter how groundbreaking or important to the plot it is, is completely ignored, because it is usually just inserted between other characters' speech in cutscenes.

This trope is named for Silent Bob, a character played by director Kevin Smith in all of The View Askewniverse movies, from Clerks to Jay and Silent Bob Reboot, who would only speak once or twice per movie, and instead said volumes with silence.

Compare The Speechless, The Voiceless, The Quiet One, and Silent Partner.