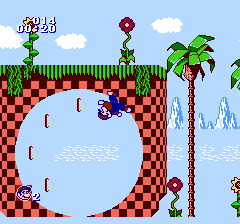 "Don't just sit there and waste your precious time. When you want to do something, do it right away. Do it while you can. It's the only way to live a life without regrets."
— Somari's box art

Somari is an Unlicensed Game produced by Hummer Team

, which attempts to mash up the looks (and the platform) of Mario and the gameplay of Sonic in a (seemingly) quick attempt to cash in. And yet, despite the fact that it wasn't the best game by said team, it still remains their most well-known product up to date, especially in the States (never mind the fact it was originally spread over such countries as Chinanote Somari's country of origin and Russianote Imported and sold by Steepler Ltd., who are best known as the guys who got Dendy running there. It was also shown on TV on the show organized and sponsored by Steepler, by no other than Sergei Suponev himself!), alongside Kart Fighter.

Given that it was only the second year of Hummer being on the market not thoroughly explored by Nintendo, the engine wasn't entirely purified, resulting in a decent and mostly playable port which, however, was chock full of glitches, such as loop sections never allowing you to get one out of six rings, and somewhat heavy controls that, for instance, made the already devilish Labyrinth Zone of the original look like a child's game. It, however, featured the Special Zone from the Master System port, complete with its music, and the Spin Dash that haven't made a debut in the actual game. In spite of such omissions and edits, reportedly, it was one of the few Hummer's games to go among the lines of Development Hell.

The end result is generally considered to be one's fun and another's pain, so play it at your own risk.

Originally distributed by JY Company under its first monkier, Somari then got rehashed, rehacked and rereleased as Family Kidnote where Somari gets spriteswapped (although the signposts still show his face), Sonic 3D Blast 5note Somari replaced with Sonic, the game starting at Spring Yard Zone (despite featuring a couple of mercy edits on Green Hill Zone) and the new title screen; note that this version is more known just as Sonic the Hedgehog, Sonic & Knuckles 5note new title music and the title screen, totally featuring Knuckles, Sonic 3D Blast 6note new title screen and the mock-up of the original menu screen of Sonic 3D: Flickies' Island, which shows up every time you start a stage, Doraemonnote a complete overhaul of the game by Waixing, which is not afraid to steal some graphics from anywhere else and The Hummernote the most recent one, featuring the newly-established Hummer Team's mascot; comes in two flavors: one is no different from Sonic 3D Blast 5, while another, with the all-new stage graphics, appeared exclusively on Samuri 60-in-1

See also the polar opposite of this game, Sonic Jam 6

(no relation), was also made for Sega Genesis.

Tropes attributed to the original Somari:

Tropes attributed to the hacks: