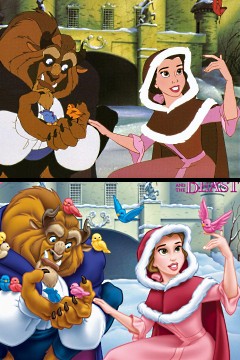 Guess which one is actual footage.
Advertisement:

In animated works, pictures by definition have to move, which means that the more detailed a given frame is, the more time and effort it takes to produce, and the more visible any mistakes made in color shading or lighting will be. As a result, even in the most well-crafted animated works, frames of actual animation footage may intentionally leave out subtle details to make the end result animate more smoothly.

On the other hand, covers and other static art don't have that problem. They are just one picture, so the production company can afford to invest more effort in them. Take the page picture, for example: The top part is a frame taken during the actual movie, and the bottom is the exact same scene redrawn for its inclusion in The Merch. Colors are brightened, textures are defined, surfaces are given depth, and extras are drawn in everywhere. Bonus points if the box cover is sparkly or "metallic" in some way so that it shimmers in the light.

Disney defined this style for their home video releases of the Disney Animated Canon to such an extent that similarly detailed covers for other traditionally animated movies not from Disney end up falling into the All Animation Is Disney trap as a result.

For manga, the poster-like artwork between the chapters proper are called Splash Pages

◊, whereas the anime equivalent (just before and just after commercial breaks) are called Eye Catches, respectively. Bonus Material art is often more detailed as well. Most Mecha have 'mechanical designs' and 'animation models' where the latter is a simplified-for-animation version of the former.

This also applies to a lot of video game box art and advertising from the 1980s, especially before it became possible to capture high-quality gameplay images off a TV.

Remember Tropes Are Not Bad. This is a result of limitations with even the best animation.